Mobile apps have become the buzzword for users all over the globe. An eye-catchy and the feature-loaded app will give an experience that is all worth the visitors’ choice and time. The salient things that have to be considered while developing a mobile application are UX (user experience) and UI (user interface). Also, before delving in deeper into the sphere, it is essential to understand the behavior of the target market you are aiming to entice with your app. No matter how much money you mint on designing, in the end, what comes to your rescue is a wonderful app interface that heightens the credibility of your mobile app. Have you ever heard of ‘bad’ user experience? Well, ‘bad’ user interface can most likely be the reason.

Style and design cannot beat substance entirely; still, a visually appealing and intuitive UI can become the key to lead conversions. Interface design which works on the layout of the functionality of interfaces is, in fact, a subset of user experience design that targets a broader realm: that is, the whole experience. So, if you are thinking that interface design is also a tough game in itself, you are absolutely right! To make your work easy, here are some useful tips to help you design an excellent user interface that will add on to the visual appeal of your mobile application:- 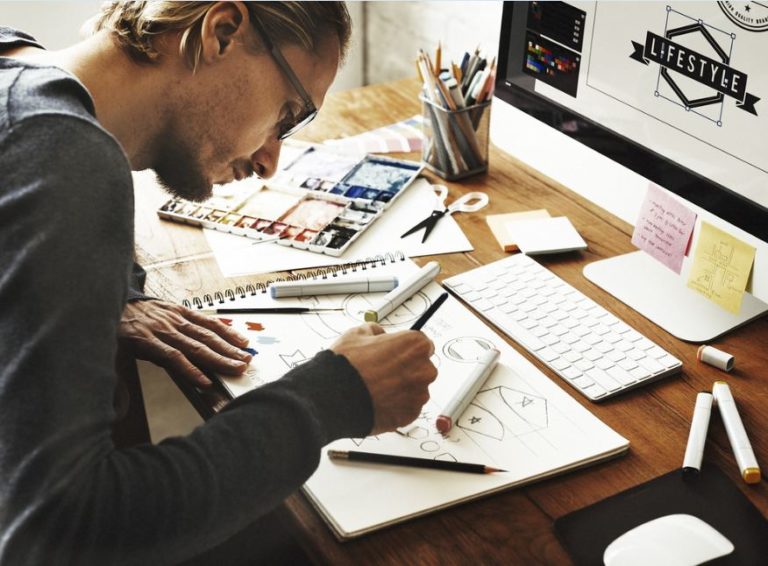 When it comes to graphics, developers generally follow the thumb rule of ‘one size fits most’, which is actually a wrong approach. No doubt, this makes resource management simpler but it can harm the visual appeal of your app. For your app to look fantastic, include graphics that are tailored to the screens of the specific devices. The best graphics ideally load at the run time and amount to a pleasant user experience altogether.

Okay, that is a no-brainer, but still, you must know your users inside and out. That accounts for all the demographic data that your analytics app can trace. But more than that, you should know what all they need and what are the problems they face in achieving their goals. It requires a great deal of empathy for the users and for that you need to go beyond the basic stats. You must know the people who are the users of your mobile app. For this, you can speak to them face to face or watch them using your product or even ask them their opinion on design, etc. It is not about their wants. Dig in deeper and chalk out what they need. If you fulfill the needs, you will take care of their wants and automatically meet all their fundamental requirements. Such insights will help you take the right decisions about the usage of the interface amongst the users. 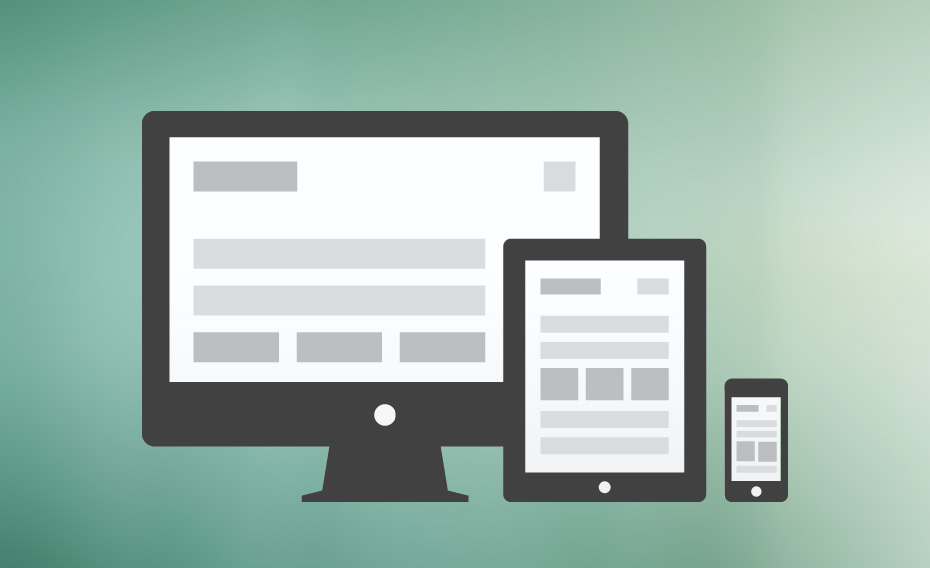 Note that user interface should be designed in such a manner that the app is fully usable on multiple devices and mobile operating systems. Be it tweaking the media queries, JavaScript or CSS- all the issues related to the display of the app on multiple mobile devices must be catered responsibly. 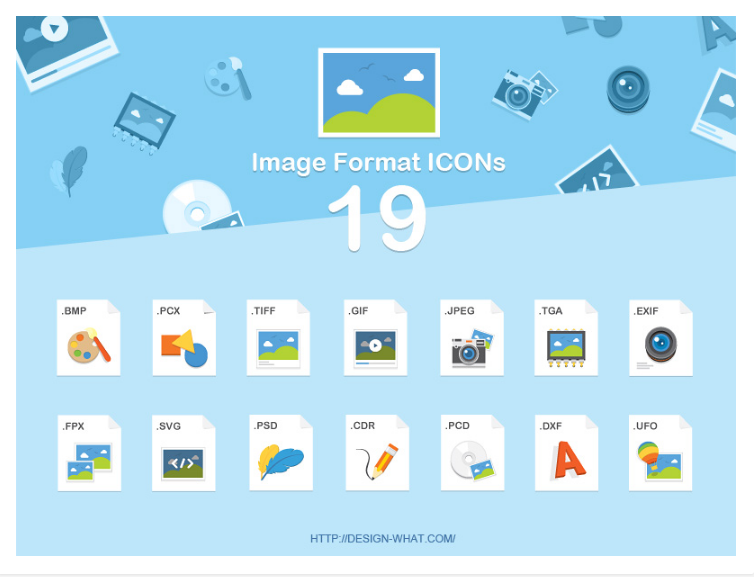 We have all encountered apps that hang while loading some large graphics file. This is not because of the wrong size but due to inappropriate format. The Android platform is compatible with media formats such as PNG, JPEG, GIF, BMP, and WebP. PNG is a suitable format for lossless images whereas JPEG quality is good for tweaking. Stretchable graphics of Android are also supported by Nine-Patch, which is a good pick when it comes to storage and download sizes. 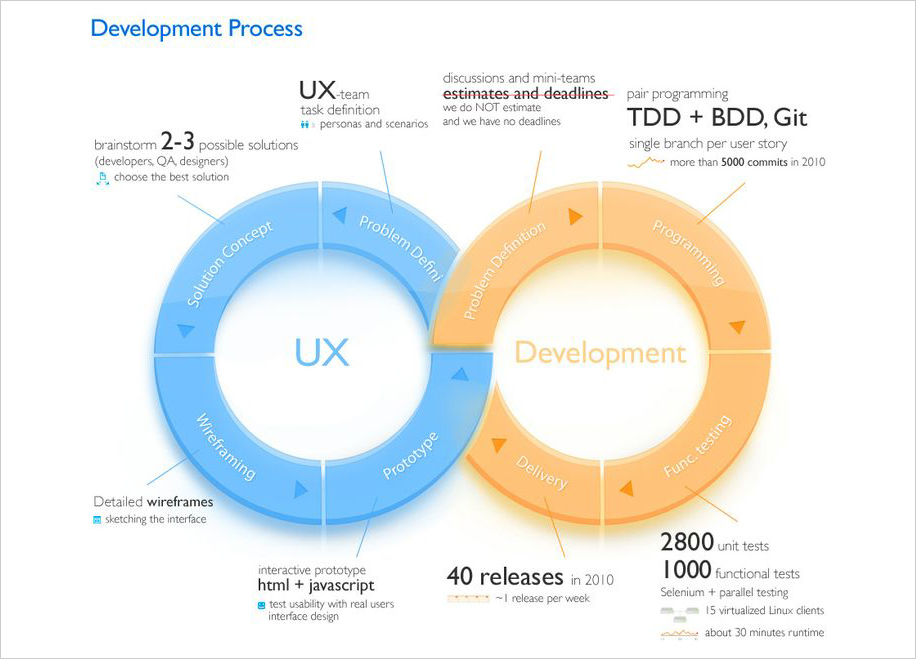 For an app creator, the best is to iterate the interface design options so as to create mobile apps that are highly interactive and retain the attention of targeted users for a longer time. Remember, each iteration amounts to valuable lessons that are great for improving performance and can be further re-applied for future projects.

Prefer to use subtle animations to transit between screens and implement UI control color differentiation to inform the state changes in the application. Such an approach adds a professional touch to your mobile app. For instance, if a screen fades between activities, the screen transitions will not look very loud and if there is the change in color of button control after a click, it means a user action has been performed with a goal in mind.

Generally, each user interfaces such as a Button or Imageview displays a rectangle of pixels on the screen, but it is not a hard- and- fast rule to be followed. You don’t have to always stick with the pointy-cornered controls. It is better to soften the look of the interface by including round-cornered controls, much like web style, comfortable with users.

Okay, now this certainly doesn’t mean being minimalistic in style or design. Keeping things simple means an approach in which the first-time user can immediately start using the app without having a need to go to the detailed set of instructions or tutorials. Yes, a simple user interface is of the type that permits the user to go for multiple actions with the help of a few steps. For instance, using effective colors appropriately will make the interface simple and easy for users to understand in the first glance. This will seduce visitors to download your app and even convince them to visit your app time and again.

The latest versions of Android provide holographic styling, 3-D icons and much more. If you are employing drop shadows and another styling in your controls, be particular to have consistent lighting, that is, a consistent orientation of the shadows on the screen. Same goes with gradients; exercise consistent values in your graphics editor so that you can have consistent gradient and textures. 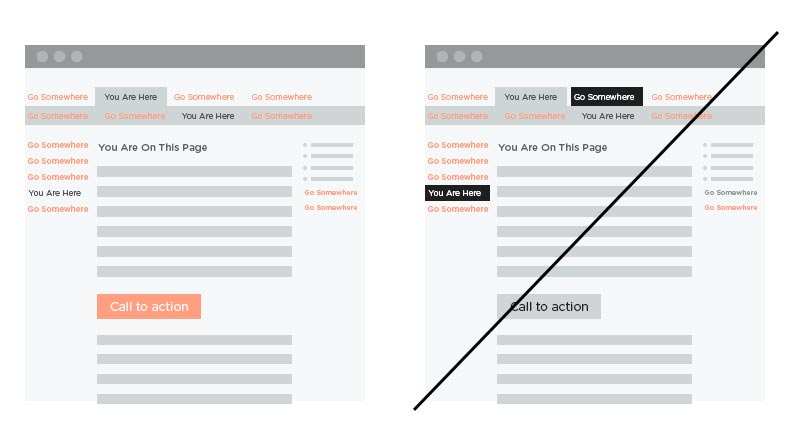 What a big pain it is to your eyes when you receive a mail full of bizarre color fonts and backgrounds from a newbie who has a recently discovered the word art. Same is the reaction when you come across applications that are very difficult to read and navigate. To avoid such a scenario, decide on high-contrasting color schemes that makes design and content stark clear. It is always better to use color schemes given in the system resources and then when you gain confidence, start experimenting with color.

Much like the above point, wacky fonts irritates us big time. It ruins the purpose of the app and defeats the goal for which users are originally here. Use fonts that are readable and pleasing to the eyes. Font size is also something to be noted of. Use a font that is big and balanced well with the other elements of the screen. Fonts below 12pt are a big no-no. 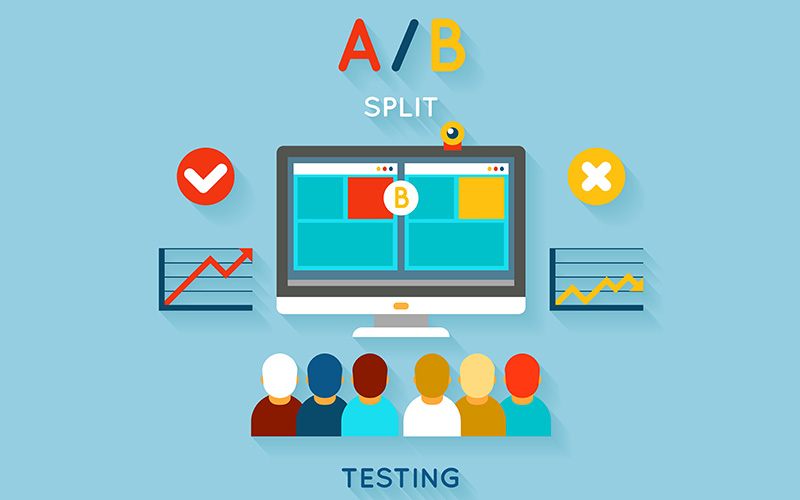 Many mobile apps seek the benefit of familiarity for the users. They create a simple and straightforward user interface that utilizes controls with the intention of what it has been created. Don’t try to reinvent the wheel and incorporate interface controls and screen design that has been accepted by the users. Follow the norms of the platform and don’t deviate trying to do something different altogether. Take the cue from the platform as to how the app should look and function.

If you are trying to innovate at your own risk, remember to employ objective methods like user studies and A/B testing to make comparisons with the initial versions of your UI. This will prove which of the two versions is preferable, efficient and more easy to use.

If you are a UI designer, remember it is always good to have real users for their ideas and opinions. This will help to effectively evaluate as to what to include and what to leave. Do this at an early stage to avoid unnecessary confusion and effort over the creation of features. Such a strategy will keep the need of re-working at bay and definitely save on a lot of time and money.

14. Back Button On Guard

Back button is an ultimate savior for the users. It must navigate the app user back on a consistent basis. If you are an Android app designer, then the native OS back button will do the needful. However, if you are making an iOS application, it is suggested that you place the back button on the top-left corner as this is where the users expect it to find. Abiding by the OS stated behavior and back button positioning; you can ideally create an app that rightfully meets users’ expectations. 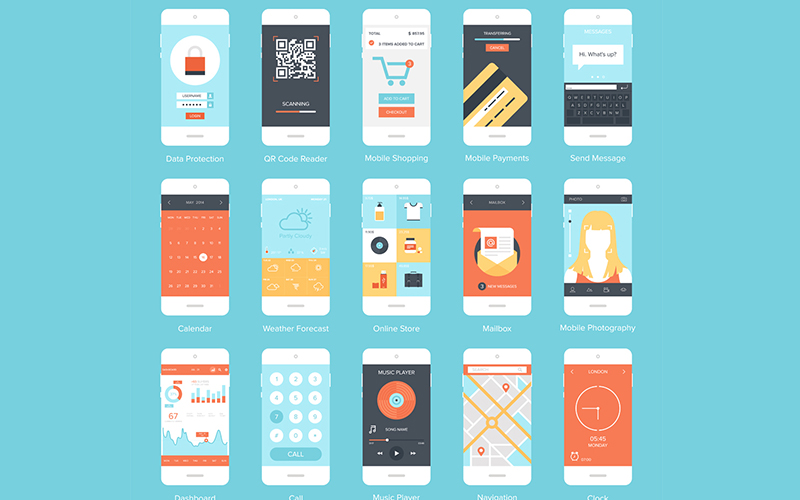 Adhere to the multiple guidelines that have been underlined for user interfaces. The guidelines vary version to version on which your app will appear, and for this you must include alternate resources to suffice multiple guidelines. The apps will be scrutinized properly before they are made open on major app stores like Apple Store and Google Play. So, it is important to follow these rules. The norms cover everything from icons to widgets to menus and activities. Stick to these guidelines while creating UI for apps of each operating system.

There have been a plethora of icons that have occupied a comfort zone amongst the users from the past few decades. They are pretty used to the functions of these icons and thus they are very much present on several gadgets these days. So, if you want your UI to score higher, try placing these favorable icons in your mobile app to add an intuitive factor to it. For example, x is used to close a file; this is known to one and all. Nevertheless, if you are keen on introducing new icons, then make sure to mention its function along with the icon to add clarity. 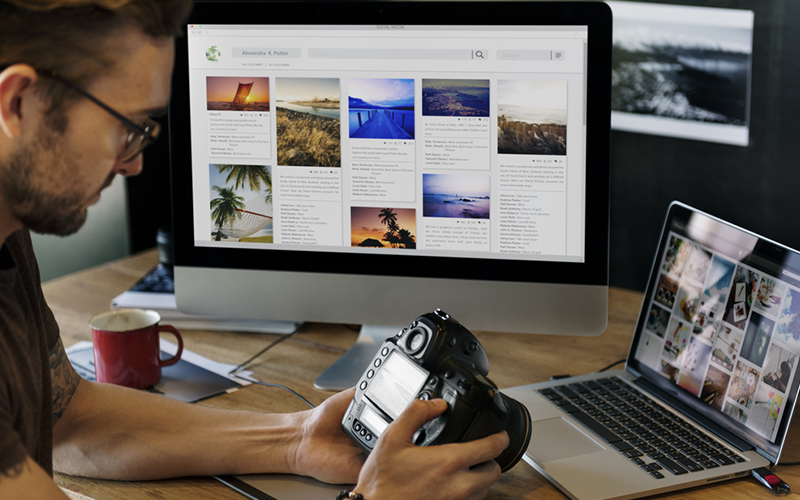 The high-tech smartphones support impressive resolutions that add to the visual appeal of the interface by leaps and bounds. If you aim to create a perfect user interface design, it is must to leave low-resolution images behind and resort to more clear high-resolution pictures. Aligning images with 264 ppi or higher will make the interface look stunning and capture the audience quickly. This will also amplify the clarity on large screen devices that are meant for high resolution. That said, vector-based images still prove to be more effective as they have the power to auto scale to match resolution. 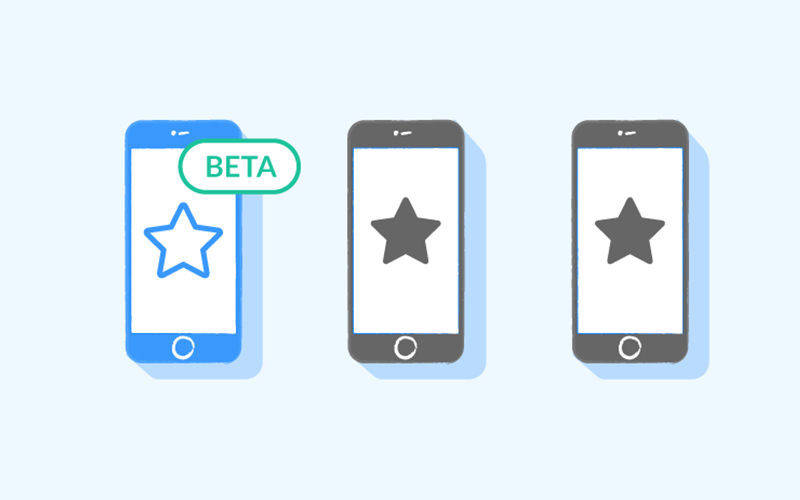 It is often observed that developers are not good with QA or beta testing. After your app is on track, it is useful to go for some beta testing with unknown users who have the least idea about the app design and goals. App designers are under the wrong notion that users will find their apps intuitive whereas that may not be the actual case. By putting the app in front of the users, you can trace certain unforeseen issues which should be tackled before you publish.

Generally, security and 508 compliance for accessibility issues are handled at a later stage, at the time of the app development process. This is the reason it mounts up the execution time span. As a UI practitioner, you must make it a point to communicate with your back-end team and other middle-ware experts to confirm appropriate data is published in a user-centric manner. The strategy should be to reduce the learning curve of the users and enhance the overall experience.

The attractive quotient of an app’s UI relies on the target market. By following the set guidelines for user interface design, you can create a product that is easy to understand and high on usability ladder. As the world of app development continues to leap, you must learn to create an outstanding user interface that makes your mobile application amazing. Hope this post nailed all the tips required to raise the bar of excellence in user interface design.