You are here: Home / Blog / Wireframes Vs Mockups – Design Tools Made Clearer

Design terminology can often be confusing. And why will it not be, when we are referring its jargons to connote everywhere. Now, that doesn’t mean that the designers can mix it up; they got to know it all. They must be fully acquainted with the differences in the various stages of design process. How can you expect a designer to plan a usable product if he confuses a mockup with a wireframe? It’s like a carpenter mentioning to a hammer as a screwdriver. Wireframes and mockups are every designer’s creative tools and must be known up and down.

It is important to be familiar with the basics to understand the varying levels of fidelity in these steps. The goal is to oversimplify things, not to set fixed rules. Note:  No process is ‘best’ to classify, but yes surely there is a ‘right’ process that incorporates suitable practices. For now, first things first, let us go through the basics and learn what wireframes and mockups are, what they do, how they are useful and some methods to build each. Read on to explore more:-

Wireframes are like a skeletal layout of an interface devoid of aesthetic features. The blueprint depicts the structure of the website or app mainly to comply with usability and functionality and not just reveal final look. The first step in the design process itself involves creating wireframes and then putting time and effort in sorting all the layout, structure and organization queries to move on to the iterations stage concerning visual details. Actually, this is why wireframes are kept low fidelity so that the format and structure can be improvised repeatedly and finally solidified.

After this is done, you can work on other visual and technical details. Having said that, don’t exclude visuals from the wireframes totally as you need sufficient details to visualize the entire layout and relative space for the elements to be included in the design. This is the reason why wireframes consist of placeholders for final graphics in the shape of squares with Xs or bare-bone forms of the icons to be added later.

Designers and developers usually keep wireframes simple so as to avoid any distraction. The best part: wireframes are fast and easy to create as they only demonstrate website or app’s structure with few or no details, graphics or color. As explained earlier, wireframes solely focus on the big picture and the main layout.  The team can go through the broad questions first and then deal with the details later. The benefits of wireframes are same as ones in the scope of a layout of any product-enabling vigilant plans before moving on to the complex levels of product cycle. This reduces the risk of missing out on the important features and making big changes in the later stages as everything is properly checked at the initial level.

Being a deliverable, wireframes can be sent to the entire team so that they know the outline well. Team members can contribute by modifying or commenting on the document, thus making most of the teamwork right from the start.  Additionally, wireframes can even be shared with the stakeholders who want to track the results in the initial stages and make necessary changes before development to avoid complications.

Owing to the low-fidelity of wireframes, there are quick methods to build them as compared to the other stages of designing :

Quite opposite to wireframes are mockups which are the models of the final website design and more or less give the exact appearance of the final version. As wireframes support structure, in the same way, mockups support visuals. It puts forward static displays of the final product, contrary to the wireframes which just give an overall feel of the website or app. By looking at the final display, you can make important decisions pertaining to color schemes, size, style and typography, thus giving you privilege to experiment with your choices and zero on the best as your final choice. Building mockups is the best way to communicate with your clients and explain them your mindset. Where wireframe is the skeleton for the UI, mockup is the skin as it completes the visual details that wireframe generally leaves behind. The visual displays placed in mockups can be mid or high-fidelity depending upon the level of your project and availability of time and resources. 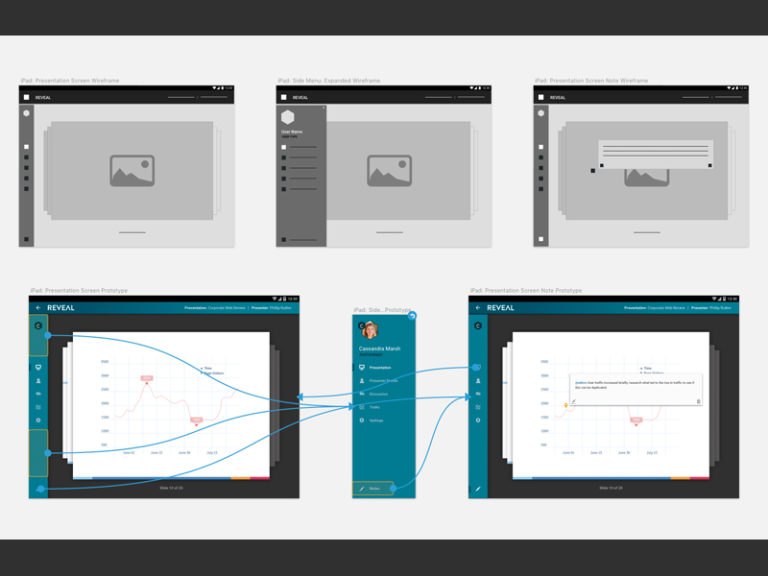 Some designers think that mockups are not really needed in the design process and are an optional part. Actually, this is where they go wrong. As wireframes focus especially on the structure to enforce important decisions, similarly mockups focus on visuals to take over the decision making task. One major gain here is that high fidelity mockups with their good quality visuals work well with the stakeholders. Wireframes game for imagination whereas mockups deal with the final product closely.

As mockups are visual-oriented, only few methods can be used to create them-

While wireframes form the rudimentary structure in design to fit elements and pinpoint their location, mockups take a step ahead with the final appearance of the design, taking in type choices, style choices, color choices et al in view. Another difference is that a wireframe is a low-fidelity representation of design as against mockup which is middle to high fidelity representation.

Mockups reflect the visual side of the project in contrast to wireframes which look after the interface interactions. The client understands the framework and process of design through wireframe deliverable and mockups, being a distinct deliverable, looks into the visual style and tone of UI. Remember wireframes can never be used as mockups but mockups can be used as wireframes which in turn can have implications on the design and budget.

Be it wireframe, mockup or prototype, the main thing that matters is your understanding of their functions and the advantages they render to the design process as a whole. Can you customize the process in the way you want?  For that, you must know how every tool fits in the process of designing. Wireframes serve as a guide for taking effectual structural decisions.

However, if you are to make choices through the static depiction of detailed graphics, go for mockups. Whichever tool you go with, it should address the needs of the project and suit your requirements. Ultimately it depends upon you how you arm your design with the help of these tools.

15 Tips – The Art Of Talking With Your Enterprise Customer